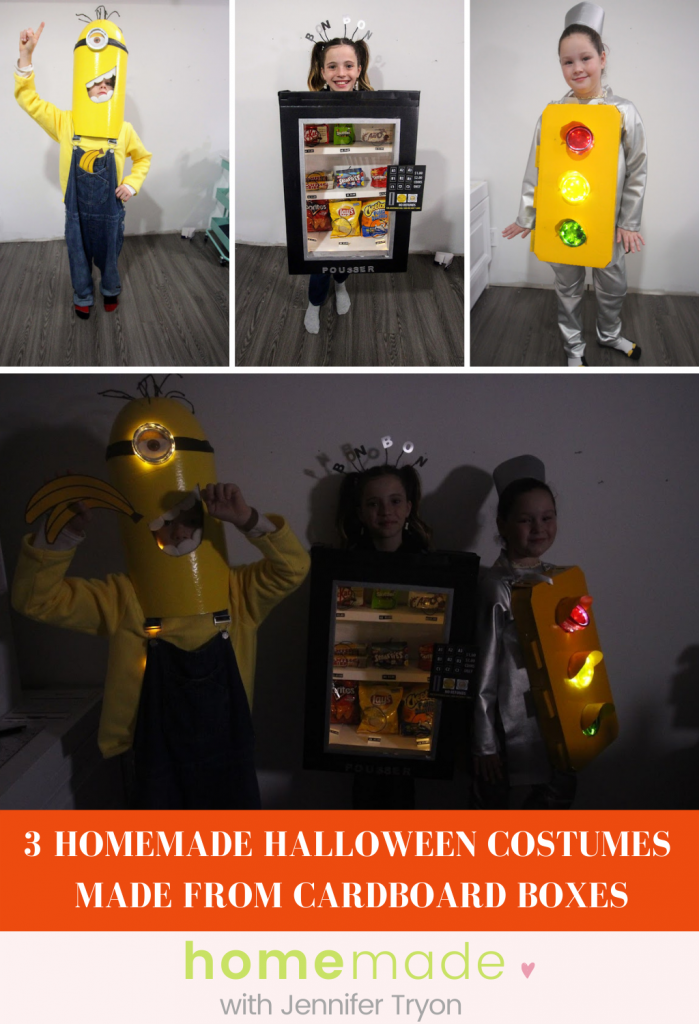 Halloween is right around the corner, and there is still time to make some homemade Halloween costumes!

Don’t believe me?? Then grab all of those cardboard boxes that you have been saving, and I will show you how to transform them into 3 unique costumes!

WATCH THE FULL PROJECT UNFOLD OR READ THE DETAILS BELOW!

If you are looking for a costume that is both fun and unique, then this Traffic Light costume is a perfect choice!

To make this costume, we first grabbed two boxes that were in the shape of a long rectangle. Then, with one of the boxes, we cut out 3 holes for the lights. From there, we grabbed some extra pieces of cardboard, cut them into the shape of half a circle, and glued them inside of the holes we had cut. By doing this, it formed the curved edge for the lights.

To make the light portion, we took some jars (with lids) and added ink to the inside. Then we put the lids back onto the jars and shook them, so the ink could cover the inside of the jars. We then set everything aside to dry.

Once everything was dry, we added the jars to the traffic light base and added string lights. Then we attached the whole thing together using a silver ribbon.

Finally, for the rest of the costume, we chose to go with a silver outfit and hat!

The most time-consuming costume out of the three is this Vending Machine, but it’s definitely worth the extra time! 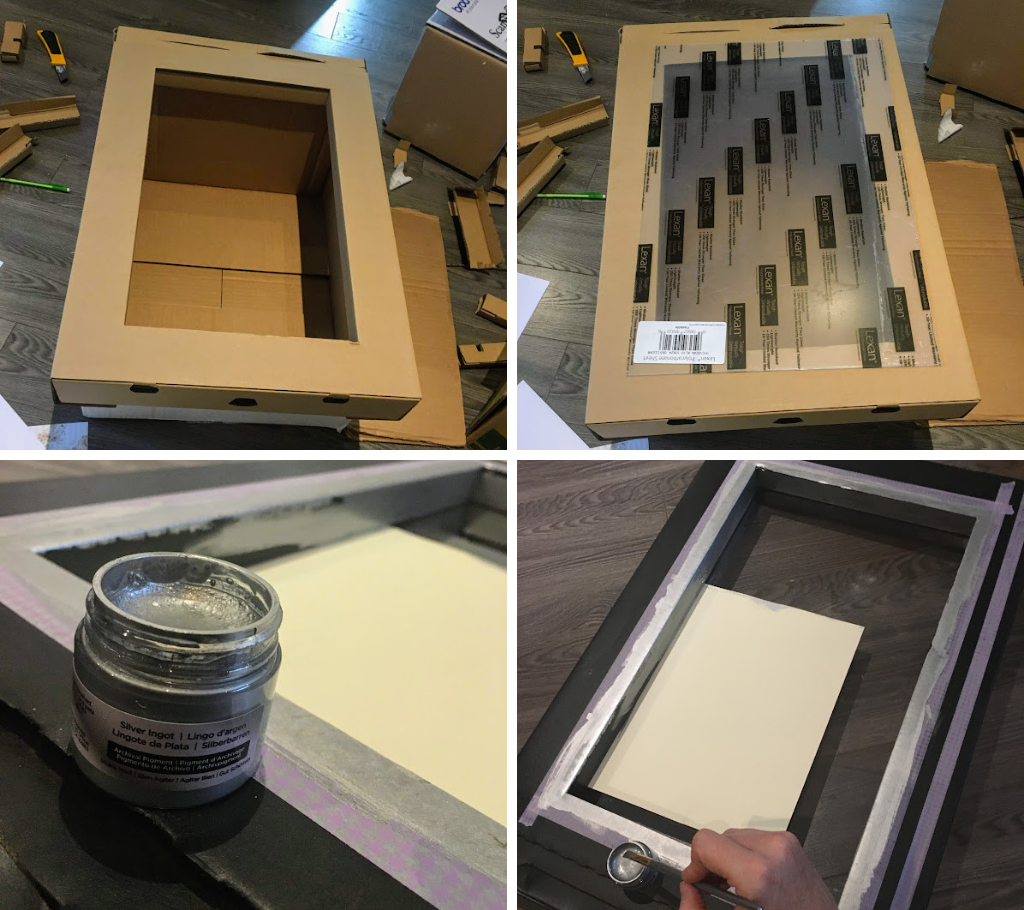 To make this costume, we first create a shadow box from some cardboard boxes. Then we decorated the inside of the shadow by adding shelving, wire, snacks, string lights, and two holes at the top so we could feed in our fabric strap (this fabric strap is what goes over your child’s neck, so they can wear the vending machine).

When it came to the outside, we kept it simple, by creating a ”frame” piece which contained our plastic (this plastic represented the glass window). Then we added it to the top of the shadow box, painted it, then added letter stickers to the bottom and a ”number pad” to the side.

Then for some extra fun, I created a headband for my daughter that said Bon Bon! 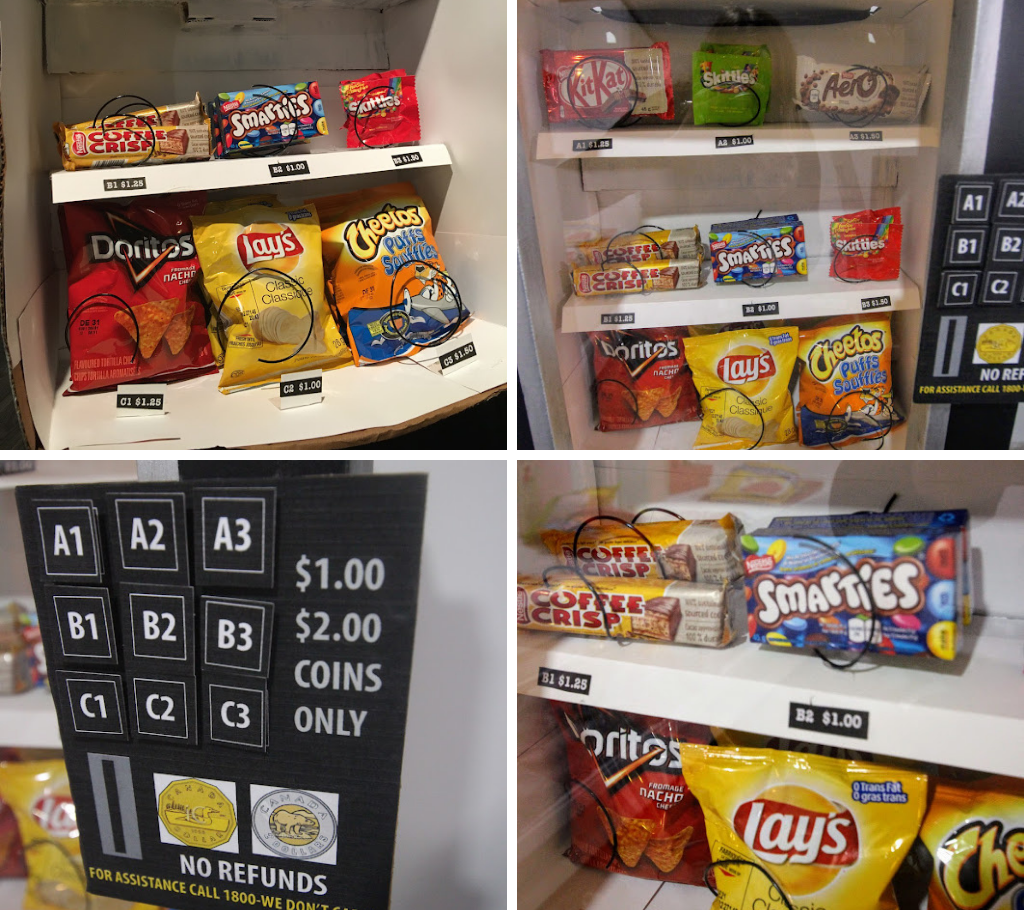 If time is an issue, then this Minion costume is the way to go because you are really only making one piece of the costume! 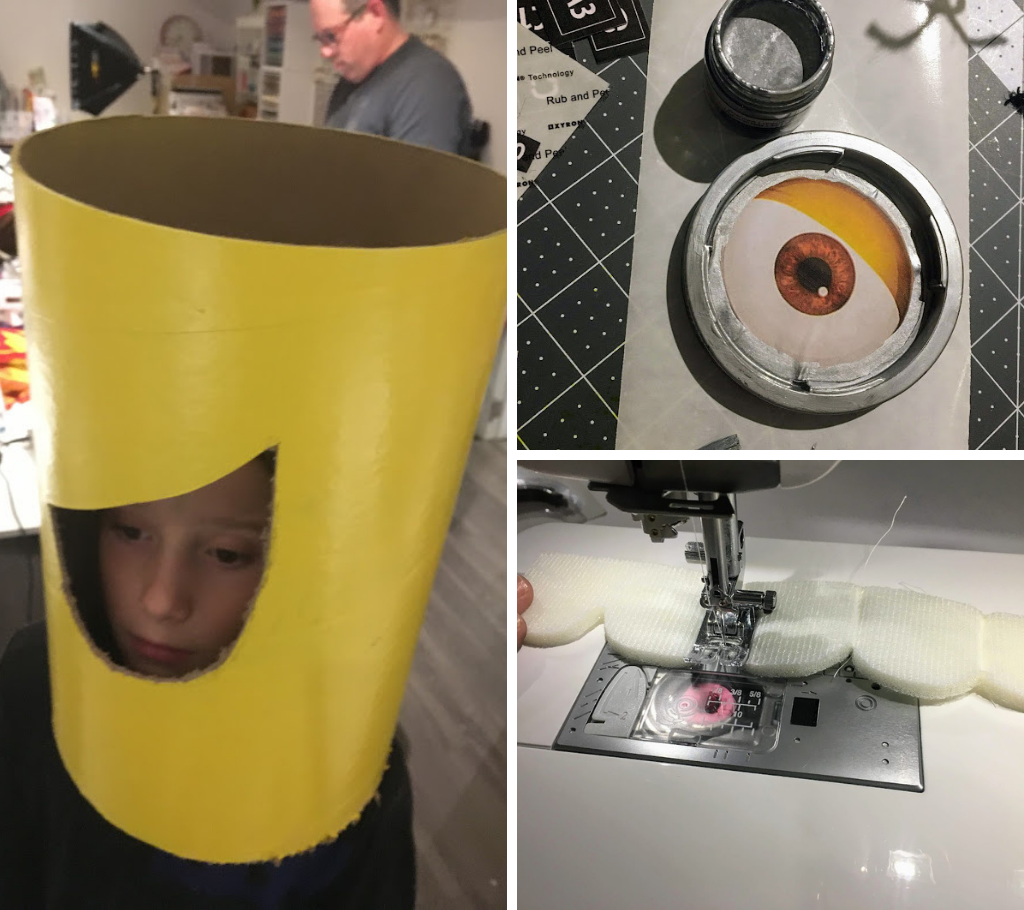 To make this costume, we first took a cardboard tube and cut it to size to ”fit” my son’s head. Then we cut out a half-moon shape for the mouth and sprayed painted the whole thing white as a base coat, then sprayed painted it yellow.

From there, we created the eye and teeth. The eye was printed from the internet, and I added a plastic grey rim around it, which I filled with some lights. The teeth were made using Flex-Foam, which I cut in the shape of the Minion’s teeth, then I sewed straight lines on the Flex-Foam to represent the individual teeth. 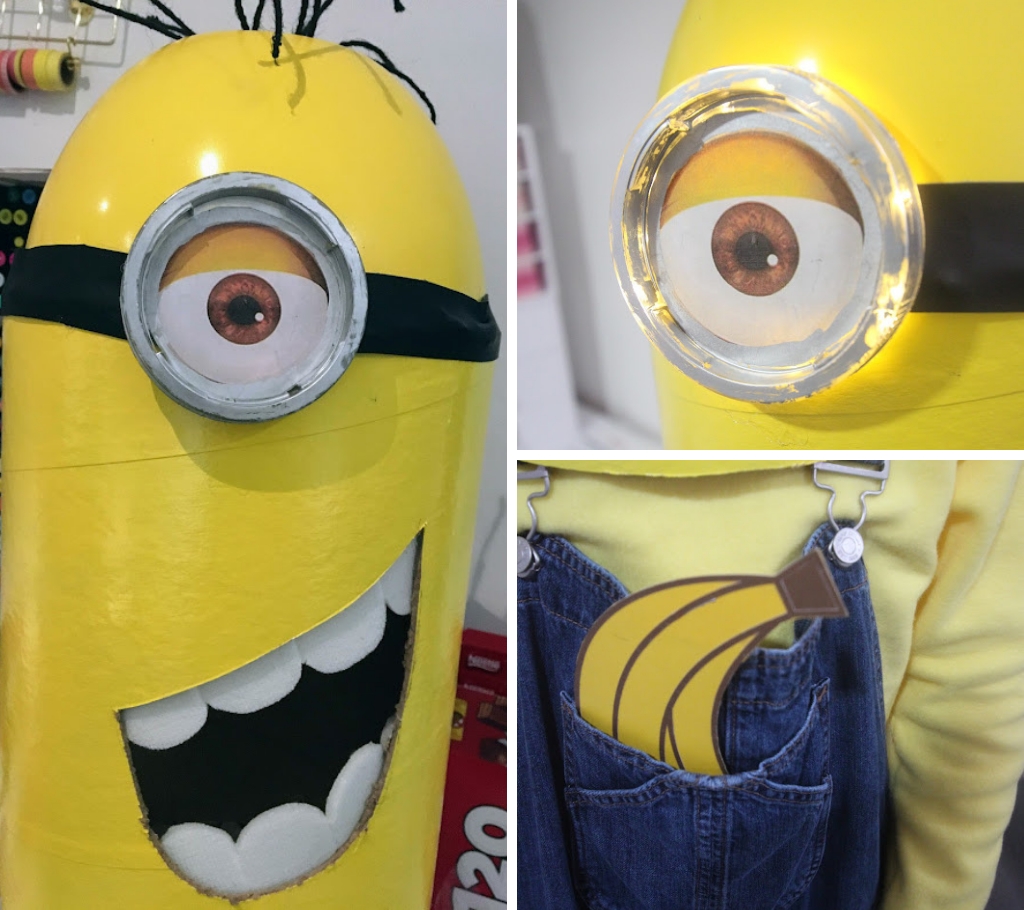 Once that was all done, we took a dome-shaped cardboard piece (which we had painted yellow) and added black pipe cleaners for hair. Finally, we glued the teeth inside of the main tube, then attached the eye and dome portion to the outside of the main tube.

For the rest of the costume, we simply grabbed a yellow shirt, some overall, and I made a stack of bananas as an accessory! 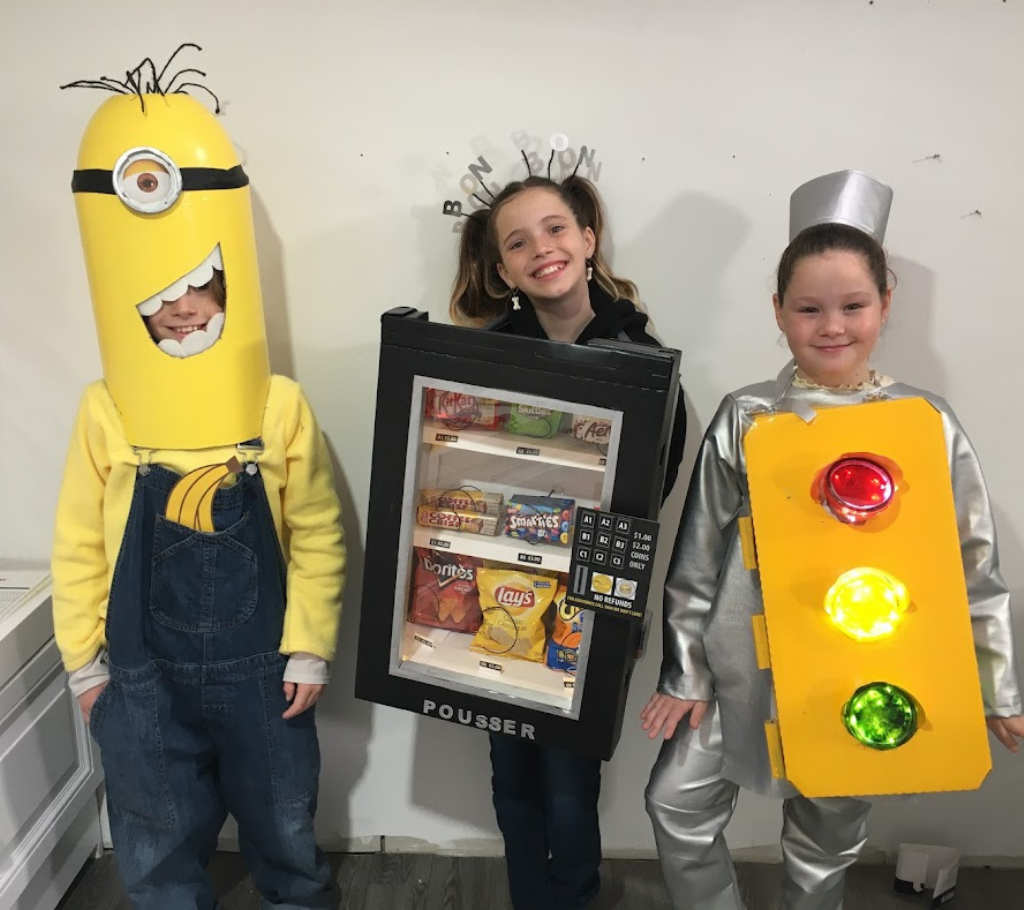 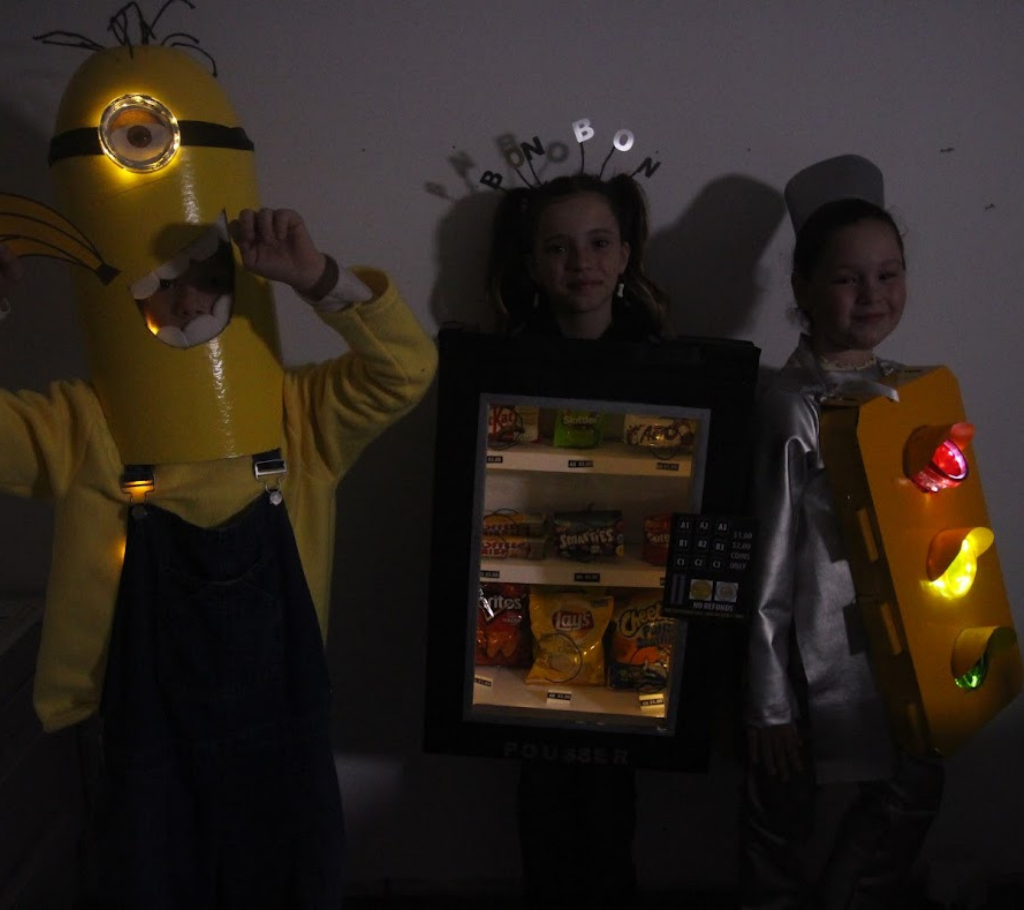 I love how all of these Halloween costumes turned out, and they were so much fun to make for my kids!

Have you ever made Halloween costumes using cardboard boxes? If so, I would love to know what you made! 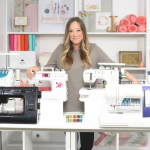 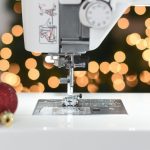